2016 was a year where everything changed, mostly for the better, for me both personally and professionally. I rolled the dice by moving 5000 miles to start a job as a postdoc in Korea to be with someone I’d only known from the internet, and a short vacation together in South Korea last summer. Looking back, it seems a little foolhardy, but a year later I’m engaged to that person and my career has developed here much faster than it was doing in the UK 2015. There’s probably a decent Toastmasters speech to be made from this year somewhere down the line. Here’s a short reviewer of other things that have happened this year.

January started at Chris’ new year’s murder mystery party and recovery steak the next day. On January 2, Meg arrived for her vacation in the UK. It had been 5 months since we had last seen each other in Korea. Together, we visited London, Edinburgh, Leeds, Newcastle, and Carlisle. On January 20 we left for Korea.

Meg at Kings Cross; Leaving party in Leeds (photo credit: Chris); and my last supper in the UK.

In February, I started my new job as a postdoc at the Institute for Basic Science (the unintentionally chuckle-worthy, IBS). Meg and I took a trip to Busan. 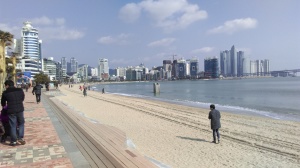 In March, we took a trip to Seoul. We went up Namsan Tower and ate Alabama BBQ in Itaewon.

In April, is the cherry blossom season in Korea, My lab went on a picnic at to a local park. 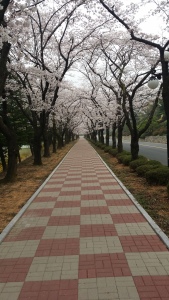 POSTECH campus in the Cherry Blossom Season; The center for Self-assembly and Complexity group picnic.

Nothing interesting happened in May or June!

In July, I returned to Seoul for the Supramolecular and Materials Chemistry Conference, which included a trip to Gyeongbokgung Palace. The weekend before we tried out an escape room in Seoul.

In August, I visited the United States. After a layover in San Francisco, I moved on to Tennessee to visit Meg’s family.  In Tennessee, we visited the Jack Daniels distillery. We also had a 3 day trip to Washington DC, via Knoxville. During my time in the US, I got a few things off my bucket list: I went skydiving and got to experience the US constitution’s 2nd amendment.

Me with an AK-47; the view from the Lincoln Memorial; Meg and I at the Whitehouse

In September, we went to Eonyang for the Eonyang Bulgogi festival. Korea experienced its 1st and 4th strongest recorded earthquakes within an hour of each other. 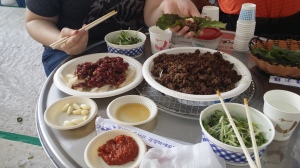 In October, southern South Korea was hit by a typhoon.  We visited a beach near Ulsan. I went to Busan for the Korean Chemical Society Fall Meeting.

In November, we visited the Eonyang amethyst caves. I went to my first Thanksgiving dinner with friends.

In December, we had we visited Ganjelgot cape, famous for being the place where the sun rises the earliest on the Korean Peninsula and the home of Korea’s largest postbox. On Christmas day we went to Busan for the Christmas tree festival. Meg and I got engaged.

The largest postbox in Korea; Meg and I (back in April, but it’s the best picture of us)