One of the best things about living in Korea is the food. Like many Asian cultures, food is traditionally shared in Korea. Often the main will be cooked in the center of the table  There are many side dishes (Banchan, 반찬) with most Korean meals. Kimchi 김치 is ubiquitous, often with many other types of fermented vegetable too.

sidedishes from a Korean restaurant.

Here are a few of the foods that I like:

One of the distinctive things about Korean food compared to western is that in some restaurants your meat is brought to your table raw and you barbecue it yourself. You can get many different cuts of meat, from belly pork at the cheaper end to Wagyu steaks at the more expensive.  The cooked meat is normally eaten by wrapping in a salad leaf with some other vegetables and sauce . 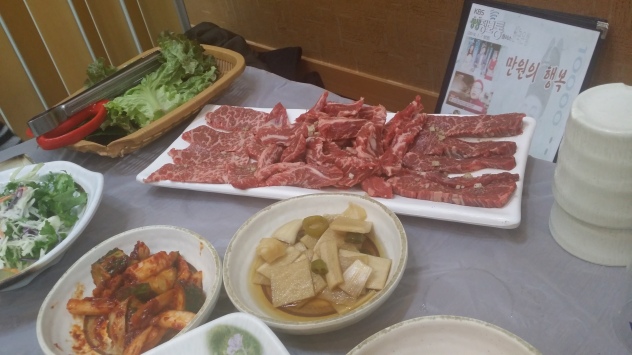 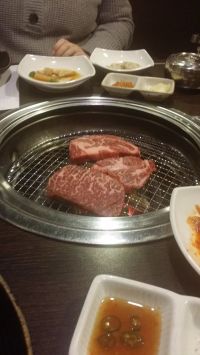 Literally means potato soup, although there is often potato in it, is not the main component.  Gamjatang is pork backbone stew. It is very similar to rib meat, but it’s from the spine. Like many Korean dishes its supposed to be shared so there’s often served as a stew in the center of the table. 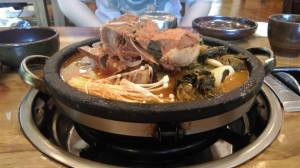 Literally means ‘chicken rib’ it’s actually chicken breast meat cooked in a spicy sauce, which often has noodles, rice cakes (ddeok, 떡), mushrooms and vegetables added. It is from a place a called Chooncheon the northern part of south Korea.  After you finish, normally the remaining sauce is cleared up with a portion of rice which is stir-fried into the remaining sauce. It’s delicious and filling. If there is one meal I think would do very well in the west, it would be dakgalbi. I doubt, though, you would be allowed to serve uncooked chicken in the UK. In Korea, it’s a popular meal and there some western fusion varieties where there it served with cheese fondue or cheese-filled rice cakes. 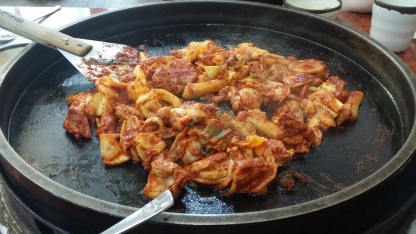 This weekend we went up to the so-called Yeognam Alps near Eonyang to see the amethyst caverns. It was once an amethyst mine that his since been converted into a tourist attraction. It shares a mountain with a Buddhist temple (see below) which was very scenic, we could hear monks singing too. The view of the mountains is quite impressive, especially in the autumn.

First, we went on a boat ride through the caves, it was quite short and there wasn’t a lot to see. Then we explored the rest of caverns on foot. Once you’re inside the caverns you follow a route around and there were various exhibits, including some samples of amethysts and mannequins dressed like miners. There were some strange exhibits too, such as the ancient Egypt exhibit and the Dokdo hall (Dodko is disputed group of small islands between Korea and Japan). There are some impressive decorations and photo opportunities to be found while you walk around (see below). The highlight of the trip was the performance area in the middle of the cave. We saw two shows, one guy playing the drums, while his partner cut up taffy in time with drumming. The other was a show by some gymnasts and a contortion artist. Overall, I’d say the cavern and the surrounding area are worth seeing but don’t get your hopes up too high about the cavern itself.

Since we were in Eonyang, we stopped off at a restaurant for some Eonyang bulgogi. Eonyang Bulgogi is ground beef that has been seasoned with garlic and sesame and then grilled, the key requirement is that it should be served within 24 hours of the meat being butchered. We also got some ‘beef sushi’ as service; the meat was very tender, but there was too much wasabi which overpowered everything else. It was a very enjoyable meal nonetheless.