This summer we went to Jeju. Jeju is kind of like the Risa of Korea.

We started in Jeju city where the airport is. With a rental car, we drove to Manjanggul caves.  These are a volcanically formed network of tubes that you can walk through, it takes about 20-30 minutes to walk the whole route there and back. It was pretty cool, and only 2000 W entry, although it was quite chilly down there.

Next, we drove towards our hotel (Co-op city hotel) which was close to the foot of Seongsan Ilchulbong., the bowl-shaped mountain formed by a volcanic eruption. The roof of the hotel has a rooftop bar and some jacuzzis which you can rent for 30 mins, but most impressively it has a beautiful view of the mountain.

In the morning we walked up Seongsang ilchulbong. It is quite an easy walk but takes about two hours especially if you stop for photo ops. The summit has an impressive view of the interior of the bowl, and on your way back down you get some lovely views of Jeju.

For the rest of the day, we drove around the coast of Jeju and made stops at a couple of waterfalls. The first was Jeonbang falls, its claim to fame is that it is the only waterfall in Asia that falls directly into the ocean. It is really impressive, you walk around the bottom of it and paddle in the water where the waterfall mixes with the ocean water.  The second was cheonjiyeon falls, which has a very nice walk leading up to it. The waterfall itself is quite impressive and scenic, but not as dramatic as the Jeonbang falls. After that, we went to our hotel near sanbangsan mountain. 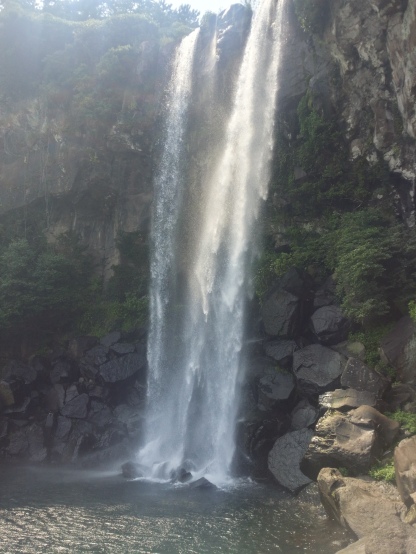 On the last morning, we went to a neat little spa, Sanbangsan hot springs. It is quite similar to most Koren spas but it also has some baths which are heated by a volcanic hot spring and is filled with carbonated water. They also have outdoor swimming pools and baths with the carbonated water. On our way back to Jeju city we stopped by a beach for lunch and a walk; the beach was beautiful with white sands and black volcanic rock. 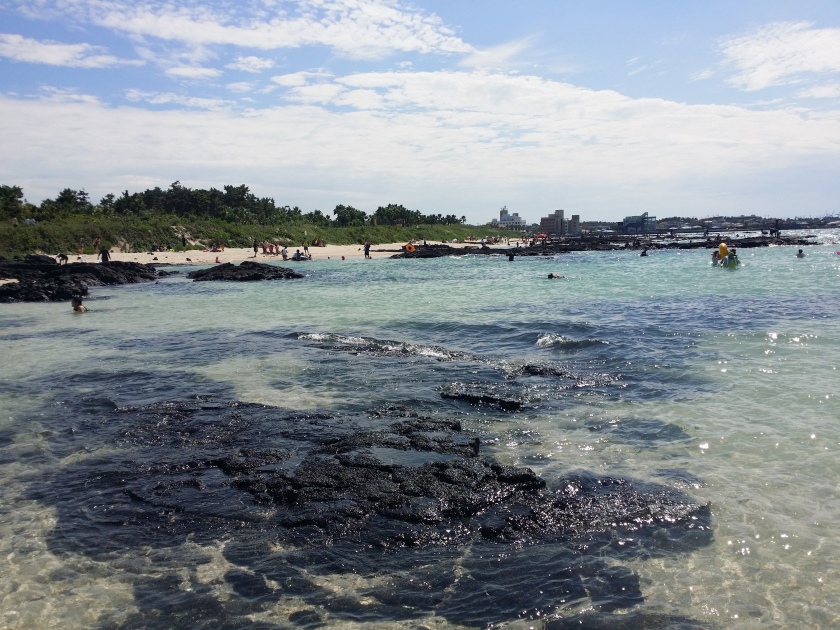 We didn’t have time to go to see the lava columns. We also didn’t hike up  Mt. Hallasan mainly because that will probably take up most of a day and it was the height of summer too.

Jeju is definitely worth a visit at least once if you are staying in Korea for a reasonable amount of time. Although it has a lot of tourist attractions/museums (such as a teddy bear museum, a sex museum, and mysterious road), it is the areas of outstanding natural beauty that make it special. Three days is probably enough to see everything if you plan your time well; if you want to see Mt Hallasan, then add an extra day. Renting a car is also a good idea, so you don’t have to rely on the buses.